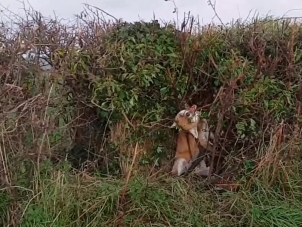 Fur farming was banned in England & Wales in 2000. It was banned in Scotland & Northern Ireland in 2002. Public and political opinion is strongly against the industry. In 2019, MPs recommended a total ban on the sale of fur in the UK and individual local authorities have banned fur sales.

Wild fur trapping involves catching wild animals, killing them and processing their bodies for fur. Wild trapping has been internationally condemned for the harm it causes wildlife. The Humane Society International explains that:

“Traps inflict great pain and anguish, both to the target animals and to unintended victims such as pets and endangered species.”

Snaring is particularly prevalent in Pembrokeshire at this time, and as snares are indiscriminate, all wildlife and even pets are at risk. Snaring itself is outlawed in all but five European countries. The UK fails wildlife by allowing the continued use of snares, which are indiscriminate and cause horrific physical injuries and mental distress to their victims. Snaring is vastly unregulated, meaning that wildlife crime and animal cruelty are frequently undetected. Non-target capture in snares is over 70%, meaning that other wildlife and pets are all at risk. The League Against Cruel Sports state that:

“In their desperate struggle to escape, animals may be strangled, or may suffer horrible and sometimes life-threatening injuries, or a lingering death.”

The fur trade claims to maintain highly regulated, strict animal welfare standards. The truth is of unregulated barbaric snares and brutal bludgeoning. The fur trade portrays “responsible harvesting” of wild animals. The truth is of plundered nature reserves – some of the few safe spaces left for wildlife in the UK.

Until now, UK attention on the fur trade has primarily focused on conditions of fur farms abroad and fur import regulations. This has been vitally important because of the enormous harm inflicted by fur farms – more than 85% of the fur sold today comes from these units. However, HIT has now highlighted the previously unseen issue of fur trapping at home for export – and the animals suffering within our own national parks for this cruel trade.

Legal protection for wildlife in the UK is often inadequate and unenforced. Once again, we see loopholes in the law result in intolerable animal suffering. Once again, it is up to the people to defend wildlife from persecution.

Please join HIT in demanding an end to fur trapping in the UK.

Coalition to Abolish the Fur Trade have more info on fur trapping HERE.